If you send email to Canada or perform any electronic business in Canada then you probably are already familiar with Canada’s Anti-Spam Legislation (CASL). However, what you may not be aware of is the impact CASL has had over the past year and insight into what’s to come.

What is CASL specifically? CASL is a comprehensive regulatory scheme which uses administrative monetary penalties rather than criminal sanctions to penalize those sending within, from, or to Canada, commercial electronic messages for which they do not have consent. CASL’s entire legislation is built and based upon consent.

Who administers and enforces CASL? There are 3 different agencies who oversee the enforcement of CASL.

What does CASL legislation cover?

The legislation goes beyond fining companies with administrative monetary penalties to also providing provisions for domestic and international cooperation so that agencies responsible for governing electronic commerce have a means of sharing information and working together to prevent spam & fraud. For example, in the U.S. the CRTC shares information with the Federal Trade Commission and the Federal Communications Commission. Additionally, CASL also contains provisions for extended liability to break the corporate veil, meaning you can be sanctioned for something that occurs vicariously where you are the legal owner/entity responsible for the party who committed the violation, such as employees, director, or agents acting on your behalf. Lastly, the CRTC has the Spam Reporting Centre, which houses all of the spam and online threat complaints.

How can you be compliant? 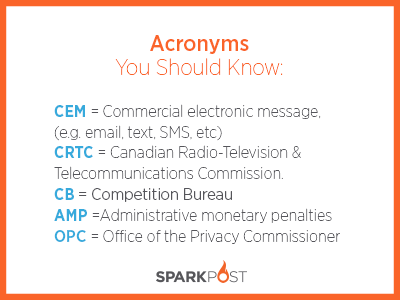 There are three requirements to be compliant:

Does consent ever need to be renewed?

According to CASL, express consent never needs to be renewed. Yet, implied consent lasts for 24 months (implied consent–based on an inquiry or application about a product or service–that only lasts for 6 months). However, there is a transitional provision for implied consent that existed before CASL came into effect on July 1, 2014. You can get the full explanation in the Database Checklist provided by nNovation.

Are there any exemptions? Yes! There are some exemptions, however, you should always check the CASL website for up to date information. Here’s what Deloitte had to say:

In our recent webinar we cover: