Giving Back With The American Diabetes Association 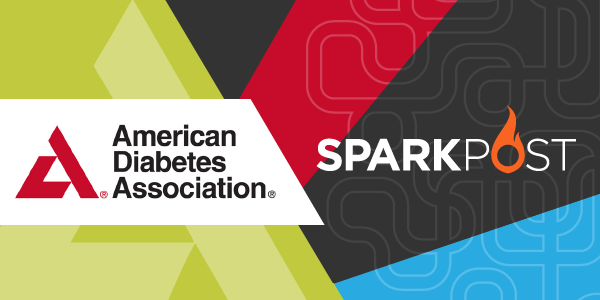 ***Program Update: We have now extended our Giving Program through the end of December 2016, so please continue to share with your networks and be sure to sign-up if you haven’t already!

We’re giving back to three great causes when you sign up for a SparkPost account in the month of November. Today, we’re highlighting the American Diabetes Association.

Those might seem like random numbers to you, but to me, they have a lot more meaning. They represent a significant amount of time, frustration, and hope. They also explain why adults were commenting on how mature I acted. When you’re diagnosed with a chronic illness at the age of 2, it affects every aspect of your life from that point on. No matter how hard you try to separate yourself from it.

It’s been 10,563 days since I was first diagnosed with Type 1 Diabetes — almost 29 years. That’s about 63,324 times that I’ve checked my blood sugar by pricking my finger. About 2,212 times that I’ve inserted a new insulin pump site since I switched from daily shots at age 13. That’s the physically painful side of diabetes. The one question people ask me about most often: “How do you DO that every day? I never could!”

Those numbers don’t tell the whole story. They’re the stats that are easy to calculate. I could go on about the less obvious side effects:

As part of our ongoing SparkPost Giving campaign, we have included the American Diabetes Association as one of the charities you can choose to support. This not only affects me, SparkPost’s Community Manager, as a Type 1 Diabetic, but also 29 million other Americans within the broader scope of diabetes: Type 1, Type 2, Gestational, and Pre-Diabetes. Diabetes is officially the seventh leading cause of death in the United States. However, this statistic is likely underreported due to the often fatal side effects of diabetes (kidney failure, heart failure, stroke, etc.).

With all of this in mind, I’m one of the lucky ones. I’ve been a diabetic for almost 29 years now, and It is only recently that I see the minor complications.. I have an amazing dog that alerts me before my blood sugar gets too low. I also have an awesome community of people who care about me and check in on a regular basis. Finally my partner who creates apps for me so I can monitor my blood sugar more closely.

How does this relate to email? Email, like diabetes, is complicated, frustrating, and unpredictable. There are rules to follow, sure, but sometimes the path that seems to make the most sense actually isn’t the one that fits the current situation. And sometimes, no matter how hard you try, things end with an unexpectedly high blood sugar, or someone clicking “spam” on your perfectly worded email.

I’ve been hearing that a cure is only 5 years away since I was diagnosed (hint: I should have been cured 24 years ago by that math). I say it’s high time that we found a cure… and I’d love your help in making that a reality.

How can you help?

You benefit from allowing us to handle the difficult email problems. I benefit from being one small step closer to a world where diabetes isn’t a part of my life. And the world benefits from one more person being knowledgeable about what diabetes is, and isn’t, and how to support those of us who live with it on a daily basis. Everyone wins, and that is something to be grateful for.